I first met Don Gerle in 1956 in the 5th grade at William Floyd School. We went on through elementary and into high school together. In high school we never really hung around with each other in school or after, as he lived in Mastic ( Poje's & Skippy's hangouts ) and I lived in Mastic Beach ( Jean's, Kozy Korner, Sunflower Coffee Shop, Neighborhood Pizza )

Don was pretty quiet in school (as I was) and we never had any trouble with each other, except for one morning out behind the school shop class. I remember it pretty well. We were in the 9th grade then. Don was with a couple of his Mastic friends Johnny Ennis and Bobby Bucholz. For the life of me I can't recall what the argument was about, but I'm pretty sure Ennis started it and it was then egged on by Bucholz, who was notorious for starting trouble from as early as 1st grade. For some crazy reason Don and I got into a heated discussion and a few punches were thrown. Probably no more than two or three and then a tussle on the ground.Then the bell rang. Round over get to homeroom . I do recall Donnie landed a really good shot into my nose and why it didn't bleed is as big a mystery as what our argument was about. I had a long history of nosebleeds that started without any help, from the time I was around 6 until I was in my late 30's. In 1955, I nearly bled to death one night and was saved by the efforts my big sister Gerri who was around 15 then and my big brother Butch who assisted her . I do remember feeling the sting of Don's punch all through morning homeroom and first period class.

So I'm back at Riverhead Raceway for the first time since about 1966, and I have brought my 10 year old son Erik, to show him just what Dad used to do in his wild younger days and where he did it. It was part of my first trip to do interviews for the book Long Ride on a Short Track. I see a Figure 8 car out there with a Captain Andy's Fishing Station ad on its side. Captain Andy's was a fixture in Mastic Beach since before 1950, so I asked about it and found out it was Don Gerle's car. I said to Erik , Wow we went to school together for years, I never figured him for a guy who would get into stock car racing. Live and learn!

Word started to get around with the old timer race crowd, that I might be doing a second edition of Long Ride, as the first edition went out of print around 2001. Word gets to me that Don has the first edition and wants to talk to me about it. I get his number, we have a real nice phone conversation, undoubtably the longest conversation we ever had. It was mostly about racing and very little about our school years ( He had no memory at all of us ever having a fist fight and was really surprised we did ) I asked him if he had any photos of his racing days and if so I sure would like to include one in the second book. A week or so later, a package of 8 x 10's arrived at my door.

Well getting the second edition into print took twice as long as it did the first time, but in January of 2013 , I sent Don a copy of page 147 of the new book, and told him it would be just a few months before he would have a copy of the actual book. The first copies went to press this Weds ( August 14th ) and were shipped to the Himes Museum in Bay Shore last night August 16th.

This morning, right after I got my shipping confirmation, I was contacted by some of Don's family telling me he passed away yesterday in Colorado, where he had been living the last few years with his son.

I hear there will be a Memorial Service sometime next week at the American Legion Hall in Mastic Beach. I am hoping to attend it.

Here are the other photos Don sent me back in 2009. The words that were written on the back of each one are his and each one was addressed to me like a letter . They are like giant postcards from a friend

Started in the back of the pack, passed them all and won. That was the start ... Don"

*Cal Barnes was my partner on all my Ford cars ... Don"

*Calvin's big brother George, was a classmate with Don & I

" Ken: Crazy night at Riverhead. On two wheels through the figure 8 on turn 4.

The guy standing there near me was Figure 8 World Champion Chuck Halaky.. Don"

" Ken: One of the first Figure 8 Cavalier body cars. Body was one of Tommy Baldwin's #7 Mods. Me and Tommy were good friends for years. One night at Islip Sppedway, like a crazy guy I called Tommy out for talking bad to ex wife. Thank God he said I was a good friend and had respect for me. He would of killed me Don"

Don I sure wished I could of sent you the new book, I will close here with some words about how I see your racing days , that I learned from JImmy Hendrickson , who we all know was one of the best ever, It was how he saw himself in the grand scheme of things, and the way I will now remember you too 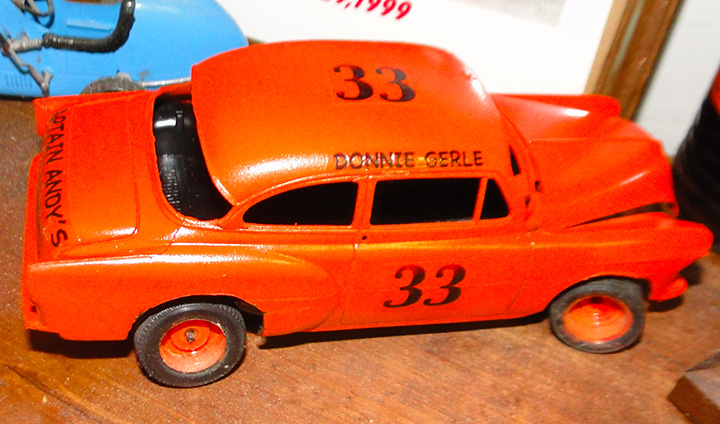 2015 : A Nashville friend brought me some model kits to build while my broken leg heals up. This '54 Chevy is the first one I am building

There's NO roll cage in it yet and I'm still undecided if I will put one in. 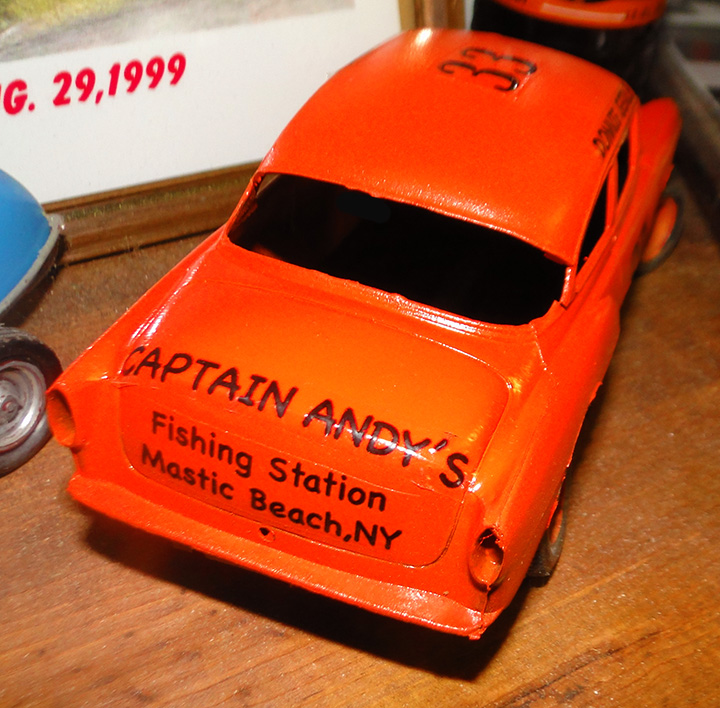